It’s as close as we have to a gold standard, so I would use it but list beside it the back-computed s from your first formula to show the reader a check. Maybe better would be to use log(UCL) - log(LCL) and to adjust the denominator accordingly. This would be very slightly less affected by roundoff perhaps.

If the user finds that the SE of the log HR was published, they should be able to enter that and to have it compared with the other 2 SE estimates.

Great, I’ll start working on that update. For dichotomous outcome studies I am using the following for the likelihood:

Are there alternative estimates that would be more appropriate here, or are these the best to move forward with? Thank you for your help!

That’s right, for the log OR. I don’t routinely use the 1/2 but I think that using it is better than not using it. You might ask for the published SE and recalculate it for the user with and without the 1/2, then say you’re going to use the 1/2 for what follows. Of course what we really want is adjusted OR and HR but then we don’t have simple formulas. Anyway, RCTs shy away from these better adjusted estimates, preferring to lose power instead of having to get a statistician to explain the result

A few of these updates have been implemented (screenshots attached). There is now a separate “study data” page that uses user input to dynamically guide data entry. As @f2harrell recommended, the various approaches to estimating the SE of the point estimate have been included, and the best option is chosen to build the likelihood. The other values are displayed for the user’s reference. Still working on some of the aesthetic changes as these are less in my wheelhouse. 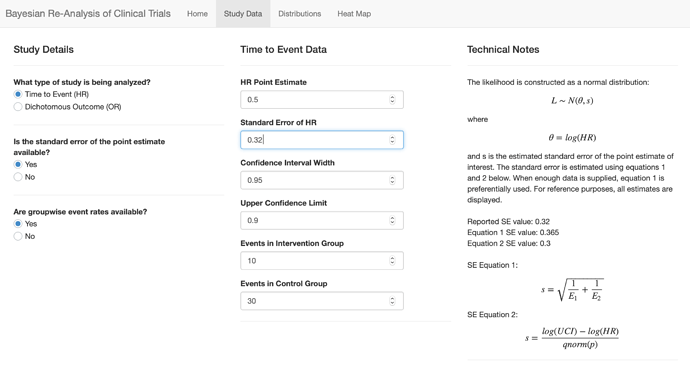 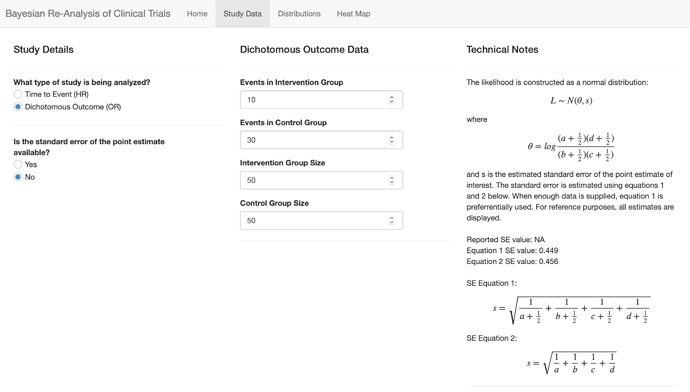 Thinking back to dichotomous outcome studies. Assuming all event rates are reported, could this be similarly broadened to RR as well as OR?

Is there a role for the addition of the 1/2 term in these estimates (as there was for OR)?

I’m a clinician, not a statistician, so be gentle!

I’ve tried to use this to re-analyse SPRINT-MIND - https://jamanetwork.com/journals/jama/fullarticle/2723256

They use a HR, not RR or OR, so not sure which to choose.

Also, and this is possibly a moot point, but I guess might affect my interpretation.
The study showed that lowering BP reduced mild cognitive impairment (
I think, from my prior knowledge, MCI is strongly linked to dementia, and is on the causal pathway.

Am i allowed to use that information to adjust my prior? Knowing the study reduced a variable on the causal pathway to the primary outcome?

I’m neither a clinician nor a statistician, but hopefully I can help!

Using the “probable dementia” outcome, I would set up the app as shown in the attached images (you can play with the prior here). You can use the HR + event rates to get a good estimate of the standard error for the log(HR) which helps to reconstruct the likelihood function.

I would agree that causally MCI is on the path to dementia (although some etiologies of dementia may occur independently of MCI, I suppose, such as a more abrupt onset vascular dementia for example). I think when setting priors for this study it would be incorrect to use information gained from the study itself (e.g., using the MCI outcome to change prior for the dementia outcome analysis). Moving forward it would be reasonable to use the signal for MCI when constructing a prior for dementia studies, I would think, given that we theorize that MCI is an intermediate step on the causal path towards dementia.

I’ll let the more experienced group chime in, though, as I suspect there is more to add! 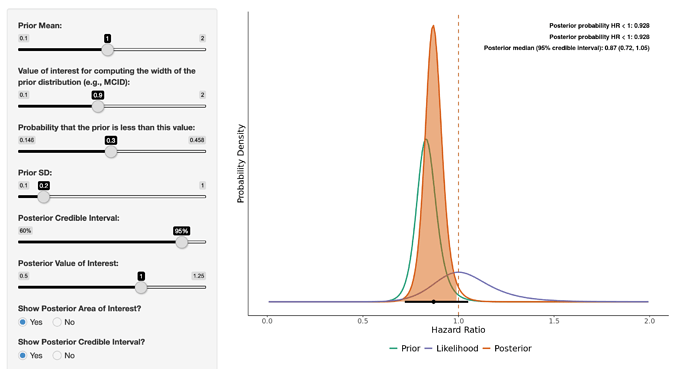 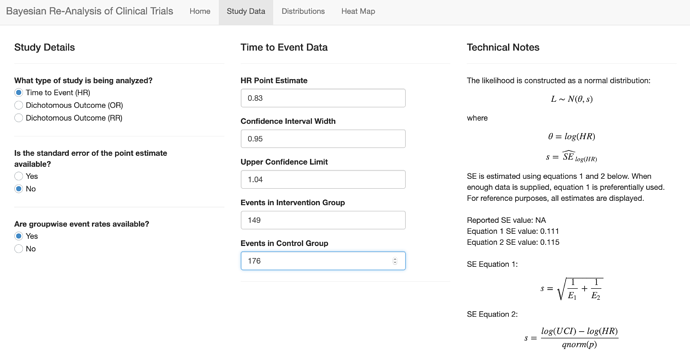 This is fantastic, Ben. Thanks so much.

Just a really great example of this sort of work. My fiance is an old-age psychiatrist, so hence my (vague) interest in dementia as an ID clinician.

I showed her last night the influence of her skeptical prior on the results and it really became clear how to combine her prior information with this new work.

As you say about the MCI adjusting your dementia prior - I agree - I guess you can’t use it!

Happy to help! Let me know if any other questions should arise, or you have any difficulty with the app in the future.

I’m struggling with how to present these findings in a manuscript that would properly account for both statistical methods. We did prespecify both methods, with frequentist approach being primary.

Any advice to this surgeon who wants to get the message “right” and has limited experience with these issues. Also, JAMA seems more Bayesian-friendly, but I have to admit that I like the NEJM impact factor. NEJM has also published the only prior trials in this disease area.

Welcome to datamethods Martin. You raise some excellent questions. Here are some random thoughts, and I hope that others will add, especially about which journal and how best to phrase results.

didnt Sander Greenland promote a dualist approach? and if so did he, or anyone else, suggest how to present the frequentist and bayesian results alonsgide each other? eg a plot of the posterior prob with p-value annotated? although mixing interpretations seems a bad idea for communicating results

That may better be discussed at https://discourse.datamethods.org/t/language-for-communicating-frequentist-results-about-treatment-effects

Many thanks to @BenYAndrew for making this app and all the other members of this forum. While I have not yet posted, I have learned a great deal from reading posts over the past months.

I am interested in applying the Bayesian re-analysis approach to a non-inferiority study, and I was hoping for some guidance. The Wijeysundera et al. paper which Ben based his app upon specifically restricted their analysis to Superiority trials which gave me some pause, but I think the equations can still be applied. Let me briefly explain the study, which was published in NEJM this year.

In this case, I think that an “event” is “non-resolution after 8 weeks,” and I should use the relative risk formula. That is, there are 2 events in the intervention group and 7 in the conservative group. Plugging these in (and defining a prior, of course), I can now compute the posterior distribution for the risk ratio. Does this make sense?

I’d also like to compute a posterior distribution on the risk difference, as that is what was reported in the original paper. I don’t think I can compute it from the risk ratio, though, unless I make assumptions about the “true” rate of non-resolution in the intervention arm. What would be a good way to present the results of this re-analysis in terms of risk difference? Perhaps the conjugate normal analysis could be done directly on the risk difference (instead of the log-RR)?

@BenYAndrew , this is simply amazing. Thank you for this great work.

I don’t know if you still update the code, but just to let you know: when I change the value in “Probability that the prior is less than this value”, something happens and the SD keeps alternating between two values non-stop. Perhaps a quick tweak can solve this issue.

Hi Ben, do you have a reference for the second formula? Thanks!

Sorry for the delay! Are you referring to the SE formula?