Variable/predictor/feature selection methods are notorious for instability and poor overlap between “selected” features and “real” features. They also have significant sample size requirements in order to be stable and mostly correct in terms of the set of selected features. As shown in this presentation, the lasso has too low a probability of selecting the “right” features and too high a probability of selecting the “wrong” features even under the ideal case where predictors are uncorrelated and the true unknown regression coefficients have a Laplace (double exponential) distribution centered at zero: 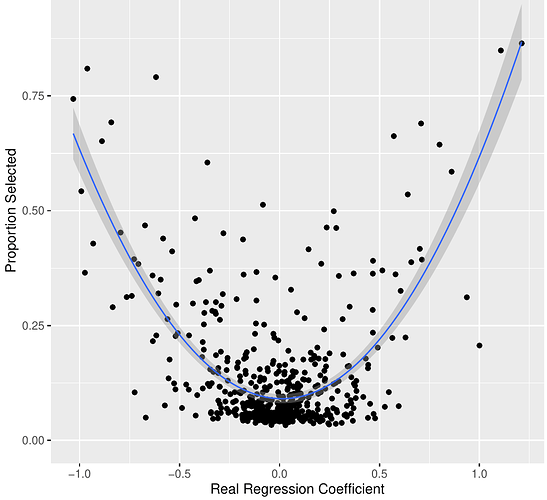 A key problem with feature selection methods is they do not inform the analysis of the set of features for which we don’t know enough to select or reject them. The following approximate Bayesian procedure may help in this regard, and expose whether the sample size is adequate for the task. This is a simplified univariable screening approach that would be most appropriate when predictors are uncorrelated with each other.

I’m interested in comments about the usefulness/reasonableness of this procedure. In my mind this is more useful than computing the false discovery probability. It quantifies what we don’t know.

7 Likes
Is Any Method So Obsolete It Shouldn't Be Used?
Significance tests, p-values, and falsificationism
lachlan September 3, 2021, 4:54am #2

I’m curious what advantages this procedure might have over fitting a multivariable model including all predictors and using a shrinkage prior such as the horseshoe?
Secondly, is there a risk that confounding/masking in univariable models may lead to us selecting the wrong predictors?

FItting a multivariable model with smart choice of penalty will be better, and the Bayesian posterior probabilities can still be computed. I was presenting an oversimplified approach. On your second question, the point is that feature selection methods select the wrong features a large portion of the time even under ideal situations. When you have collinearity, confounding, etc., things are worse. I’m trying to quantify when to give up on feature selection, i.e., when the information content in the data is insufficient for the task.

If the features are of similar “types” (like in omics data) what do you think of a slightly modified approach to the above where its not quite a multivariable model but essentially a univariate model that pools the estimate of the coefficients:

Essentially this would result in p univariate models, but the B_j would be pooled whereas the method proposed in the OP is still fully separate models. Wouldn’t this pooled approach be more efficient use of the information in the data, while retaining similar interpretation of a univariate model? And also, the partial pooling would induce some correlation between the estimated B_j’s which seems more realistic.

Joint modeling is usually better, and the same probabilities can be computed as I stated for the repeated univariate case. For joint models I suggest using standard notation and putting horseshoe or other reasonable priors on the \beta s.