Could we calculate the adjusted proportion in Table 1?

there is a sample paper showing the adjusted baseline characteristics
Glycemic Control and Coronary Heart Disease Risk in Persons With and Without Diabetes: The Atherosclerosis Risk in Communities Study | Cardiology | JAMA Internal Medicine | JAMA Network 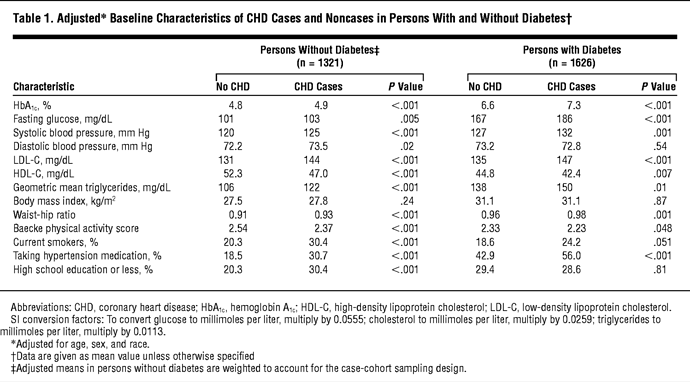 What is the ultimate goal? What are you trying to estimate? How do you know what to adjust for?

I’ve never seen a paper that does an age and sex adjustment when attempting to show descriptive statistics for baseline distributions. That’s not to say that it doesn’t have meaning; it’s just unconventional. It also depends on whether you are wanting to adjust to an external population distribution (which would require a lot more information) or to adjust to a single value of age and sex.

Thank you for your kind comments.
Many researchers in our groups used the adjusted characteristics in Table 1. I feel confused too after learning more statistic knowledge. I learned a lot from your careful explanation and I will read that helpful post.

I agree with Frank that adjusted table 1 is unconventional and plausibly misleading.
But let’s separate the two issues - first presenting the adjusted descriptions of covariates, and second the stratification over an outcome (e.g., diabetes).

Commonly, Table 1’s main purpose is to describe the sample you analyzed in the study.
It’s a descriptive tool to get a sense of who is in this study, anyway? to assess the generalizability of its findings.
Presenting (age and sex) adjusted covariates slightly shifts the table’s task from a descriptive one to an inferential one, and it is advised to avoid mixing the two.
Furthermore, it also obscures the information of the baseline covariates you adjusted for, which are undoubtedly important or otherwise you wouldn’t have adjusted for them in the first place.
This is not to say that presenting adjusted table 1 is always wrong, but if you chose to do unconventional things then the burden of justification is on you.

As for presenting stratified table 1, I’m usually in favor. However, the stratification should be based on a criteria participants enter the study with. Therefore, stratifying on an outcome (which is usually not known on baseline but only at end of follow-up), is not informative and will just surface up prognostic differences (that will probably be accounted for in the outcome modelling the study most-plausibly have anyway).
Note that this rule also accommodate the “exception” of case-control studies, in which participants are enrolled based on their outcomes, and thus making the only reasonable example I can think of that where it might be informative to stratify on an outcome.

Furthermore, it also obscures the information of the baseline covariates you adjusted for, which are undoubtedly important or otherwise you wouldn’t have adjusted for them in the first place.

For example in prostate cancer research, the most important risk factor is age followed by PSA (prostate-specific antigen) level. PSA is strongly age-related. If you adjust PSA for age you’ll take away much of its prognostic value.

During my PhD, many people recommended me to make an adjusted table 1 and they think it is thoughtful for readers to obtain more information. And most time I learn data analysis by reading previous studies, which have no explanation on why they did that. Now I found how naive I did in previous work. I am very pleased to receive your careful explanation. Thank you very much.

Nice example and I really learn a lot from your comments.