I am working on a project involving two approaches to a surgical intervention. Let’s call these A and B. In a randomized trial, approach A was shown to substantially improve survival at one year following surgery when compared to B. However, in now much longer term follow-up of this cohort, patients with approach B who survived beyond one year are experiencing fewer complications, and in fact landmark analysis of those surviving at the one year mark seems to imply increased risk for death in those patients receiving approach A. Essentially, if you have approach B and survive the early postoperative period, you seem to be better off.

In thinking about these data, I am wondering if there is perhaps a reasonable approach to tease apart which patients may be at minimal risk for death at one year regardless of surgical approach with the implication being that these patients may in fact benefit from approach B given their unlikely early risk for death (and thus limited benefit of approach A) and theoretical long term benefits that we are now seeing in follow up data.

Is this simply a case where risk magnification plays a role? I’m having some difficulty wrapping my head around how best to approach this question - hoping some discussion can be fruitful!

I think the most important factor here is patient utilities. The legendary cardiac surgeon John Kirklin would ask his valve disease patients “what do you want to be alive to see”. Based on whether it was a short or long time horizon he’d then speak to them differently. Putting that aside (not a good idea) I’d look at 2 things:

Ah, yes I think I have heard this approach before for valvular interventions.

In this particular case, the surgery is a life sustaining event. Without any intervention the natural course of disease is death. The two approaches to the intervention have physiologic differences that provide some biologic basis for why one may be more detrimental in the long term vs. short term. If one were to look only at the one year follow up data any reasonable clinician would advise his or her patients to have approach A. However, in looking at much longer term data, those patients who survive beyond the first 12 months start to diverge both with respect to survival and accumulation of comorbid conditions, with worse outcomes in those receiving A.

I am 100% in agreement with you that patient utilities are incredibly important here, and actually this is why I find this question so important. If we can identify patients for whom early mortality is a low risk event and thus could be expected to not have a substantial mortality benefit from approach A, those patients could in fact be counseled to pursue approach B with the expectation that this will yield an improved disease trajectory in the future.

Does that seem reasonable?

I’m trying to think about how to approach this. If I were to take the HTE / patient-specific efficacy route, the model of interest would be a Cox regression with a time varying treatment effect (with three primary time periods of interest). There are a few possible interaction terms of interest, but I suspect most of the individual variability is going to be on the absolute risk scale vs. relative risk. This would give us the ability to plot patient specific covariate-adjusted predicted survival curves under treatment A vs. B. How to systematically compare these, though, I’m less clear on.

I may be misunderstanding the scenario, but this seems like a classic example of the “Hazards of hazard ratios”. 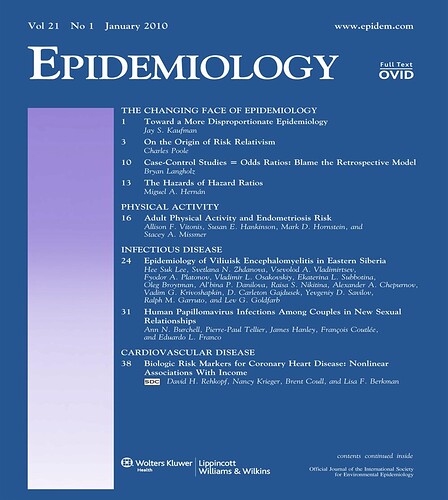 The Hazards of Hazard Ratios : Epidemiology

An abstract is unavailable.

Say treatment A is effective at preventing early death. Then, by the end of the first year of follow-up, many of the people who were most at risk of death are still alive in group A, but not in group B. Therefore, restricting the analysis to people who survived for at least one year introduces a selection bias whereby the people most at risk of death (and complications?) remain in group A but have been selected out of group B. This could make group B look better than A in the second year, even if every single individual in the sample would be worse off had they received treatment B.

Some solutions to this are discussed in the article I linked above. These include constructing survival curves as you mention.

That is a great reference, thank you!

Agree with the potential for introduction of a selection bias when limiting analysis only to those surviving. In this particular population and with this particular set of interventions there are some interesting mechanistic / pathophysiologic considerations that support quite a bit of variability in hazards both with the passage of time and potentially an interaction with time and intervention. One thing that I can be sure of is that any sort of one number summary (singular HR, etc.) is insufficient to describe the problem – I think construction of individual adjusted survival curves, allowing for both time varying hazards and treatment effects, may be the best approach.

Or use a state transition model and estimate mean time in states a,b,c for suitable choice of a,b,c.

I’m hoping that your question can inform the design of future studies (with shorter-term surrogate endpoints ruling the day). For example, that studies routinely capture the outcome goals & expectations of the participants, which would be telling about the consent process as well.

There’s also the more likely possibility that the study population will be younger and fitter than the general population with disease X due to who is asked to take part or able to complete the consent process and additional study tests.