Graphical depictions of raw data and data summaries as well as graphical displays of results of statistical analyses are important components of published articles. The single best reference for scientific graphics is Bill Cleveland’s classic text The Elements of Graphing Data. Handouts covering some of the methods in this book may be found here and an excellent video by Rauser is here. Other resources may be found in Section 4.3 of BBR, here and here.

Many standard static graphics are very suitable for inclusion in journal articles. These include

Though very commonly used, bar charts are no longer recommended, for many reasons including 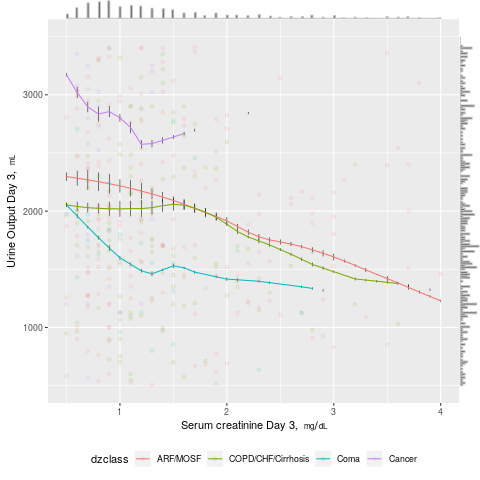 For line graphs, including step functions, an effective way to distinguish curves in published articles is to use thin black lines and thick grayscale lines. Curves can even intertwine and still be distinguished. See for example Figure 1 of this.

ECDFs are wonderful whole-distribution summaries that do not involve binning. When the number of groups is less than, say, 5, one can show stratified ECDFs on one graph. Examples of ECDFs are in BBR Section 4.3. When there are more categories, box plots, which are “skinny”, are typically used instead.

John Tukey’s box plots are widely used for displaying characteristics of truly continuous variables, and for good reason. One can show box plots stratified by a categorical variable having a large number of categories. Box plots show the three quartiles and the mean, plus “outer values” which can be confusing to some, making the reader falsely judge the outer values as “outliers” to be mistrusted. Most readers concentrate on the quartiles. To only show 3-4 statistical quantities means that box plots have a somewhat high ink-to-information ratio. They also fail to reveal data features such as bimodality and digit preference.

Extended box plots show more information, as seen in the schematic below. 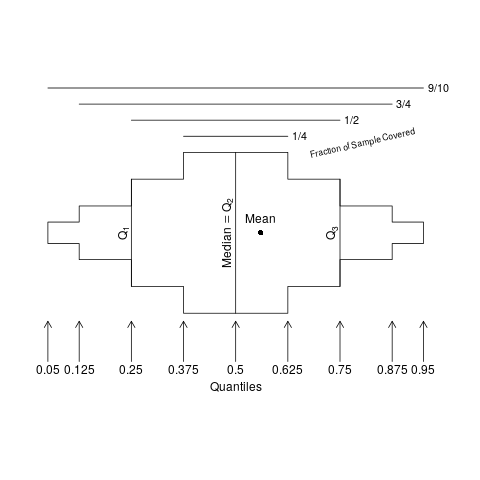 Here is an example of extended box plots stratified by U.S. state. States are sorted by the mean age of simulated subjects from that state. 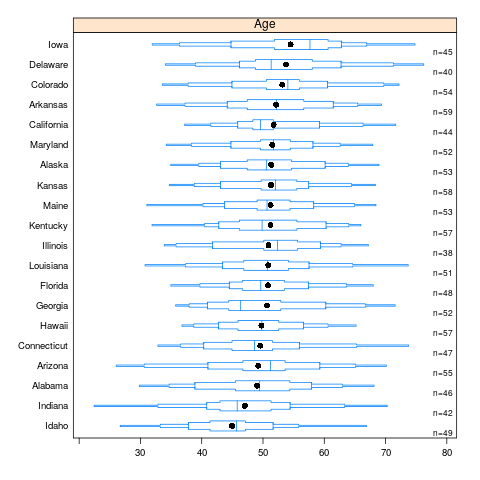 To show the full data distribution (like ECDFs but not smooth), high-resolution (lots of bins) histograms are very useful. Spike histograms use needles instead of boxes after binning the data into 100-200 bins (or fewer if the number of distinct data values is < 100). They make bimodality and digit preference apparent. One can add selected quantiles underneath the spike histogram, shown as tick marks on an axis, and the mean can also be shown. When using interactive graphics (see below) one can hover over a spike with the mouse and see the x-coordinate and frequency of values for that bin. An example taken from here is below. Note the bimodality of blood pressure distributions, due to the protocol for data collection (record the most extreme blood pressure measured during the patient’s day in the ICU, either low or high). 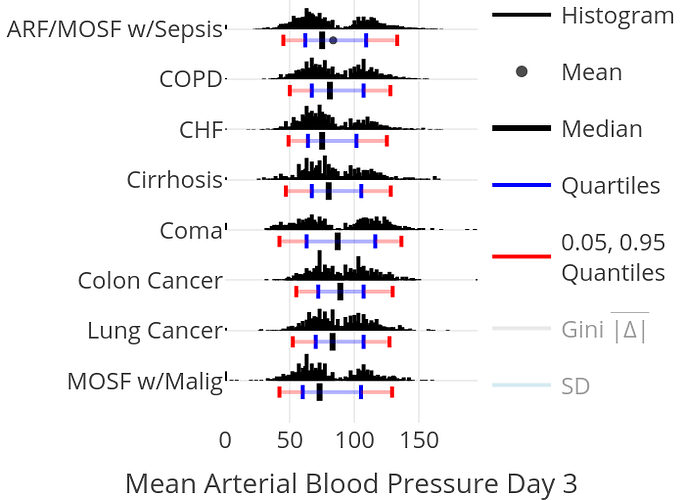 In a parallel group randomized clinical trial, the patients in one treatment group are not a random sample of the population of patients, so confidence intervals for within-treatment measures are at odds with the experimental design. Such clinical trials are designed to make inference about differences in outcomes between treatments. Yet many papers published in the medical literature only provide the within-treatment-group confidence intervals. 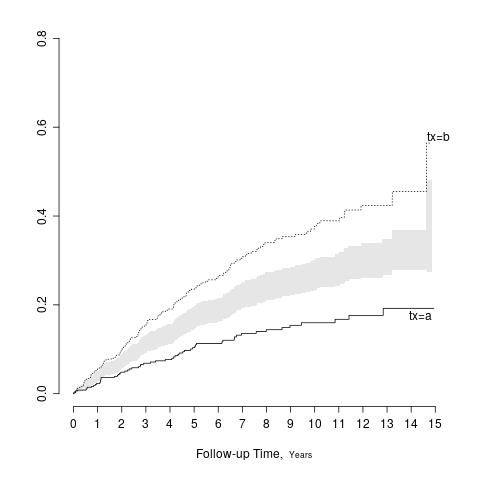 Online journal article supplements can be of any length and format. Instead of using pdf format, one can use for example RMarkdown to produce an html report that contains interactive htmlwidgets created, for example, using javascript plotly graphics. Two of the many features that such content makes possible are

See this for several examples of interactive graphics useful in biomedical research. Here is an example of an interactive attribute chart showing all combinations of symptoms that occurred in patients. This could also be used to show reasons for exclusions of patients before randomization in an RCT.

This topic is a wiki meaning those with sufficient datamethods privileges can edit this top article to make it better. Also feel free to add your suggestions, examples, and criticisms as replies below.

Wonderful topic! I have some suggestions particularly with respect to uncertainty visualization. There are many nice possible replacements for uncertainty intervals that fit into a similar space while giving more information (and visually demonstrating that the choice of alpha for a particular interval may be arbitrary, or allowing a reader to apply their own threshold). The tidybayes article on slab+interval geoms (full disclosure: I am the author) outlines a number of those possibilities: 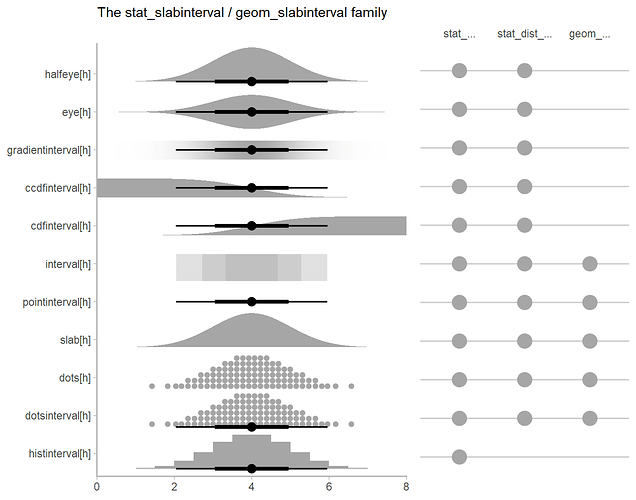 E.g., given a sampling distribution or a posterior, variations on densities or CDFs might be helpful for letting readers apply their own standard of evidence. Quantile dotplots (last two rows) combine this idea with the “frequency framing” approach to risk communication that also motivates things like icon arrays, used in medical risk communication. These are dotplots of quantiles from the distribution, allowing easier estimation of arbitrary intervals (down to the resolution of the dotplot).

Improvements can also be made on uncertainty bands in regression fits, for example this chart (from here): 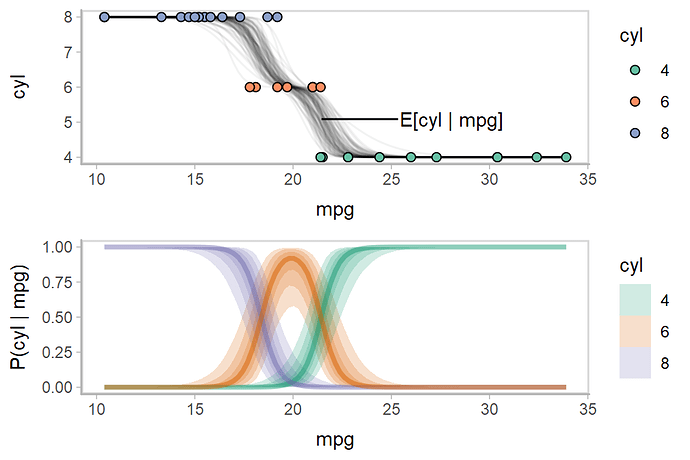 The top chart shows spaghetti plots of the uncertainty in the conditional mean using draws from a posterior distribution (which also shows correlation in the mean across values of mpg, not visible when summarized using intervals), and the lower chart shows multiple uncertainty bands per line instead of just one (again, to facilitate readers applying their own threshold). 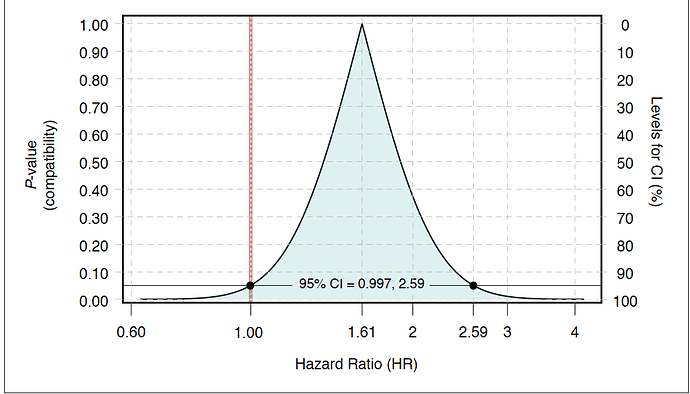 Relatively simple to graph with the concurve R package

i would just note that sas graphs have improved a lot with annotate and sgplot etc, and there’s a free ebook here which includes medical data (chapter 4): http://support.sas.com/publishing/vds.pdf, the author’s sas code is available here: https://support.sas.com/en/books/authors/sanjay-matange.html

I know that SAS graphics have improved a lot, but my own personal opinion is that graphics in other packages has improved faster. And with R you can easily convert many of the graphics to be interactive.

is “interactive” good with all the reproducibility talk? one good thing about sas is it reproduces the same figure exactly - any adjustments are within the code and not made after the image is created. I want to get back into matlab, i think it feels like R + great graphics, although i don’t know R well…

I like this short <5min read on violin plots from https://twitter.com/kathmwood: https://inattentionalcoffee.wordpress.com/2017/02/14/data-in-the-raw-violin-plots/

is “interactive” good with all the reproducibility talk?

Definitely, since I’m really referring to partial interactivity, e.g. drill down to see more information. And one of our hotshot R developers showed me how to create an RMarkdown html report that has a click box in it that allows the user to view printable static graphs vs. semi-interactive graphs when the statistician has dual code chunks to handle the two tasks (e.g., one chunk calling ggplot and the other calling plotly).

wow great discussion.
where can I find the code for the spike histogram in the eg
thanks

Click on the link just above the plot, and look for spike histograms in that document. Then click on Code there to see the code. That particular graphic used plotly to produce an interactive graphic, which uses javascript and html after calling from R.

A problem with violin plots is their resemblance with a certain body part: 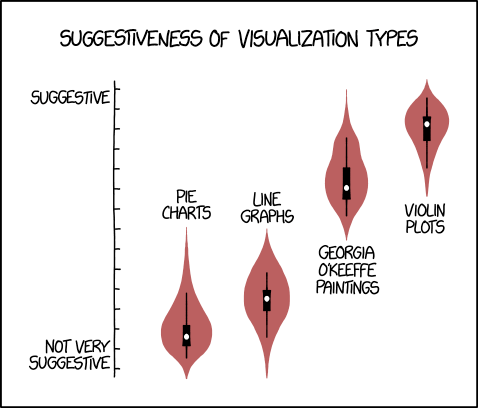 Strictly speaking, 'violin' refers to the internal structure of the data. The external portion visible in the plot is called the 'viola.'

(Someone else made a point about it before XKCD, but I couldn’t find it right now.)

Half-eye plots or joy plots don’t have this issue.

I dream to replace the infamous “Table 1.” with better visualizations…
Toying with the ggridges functions: 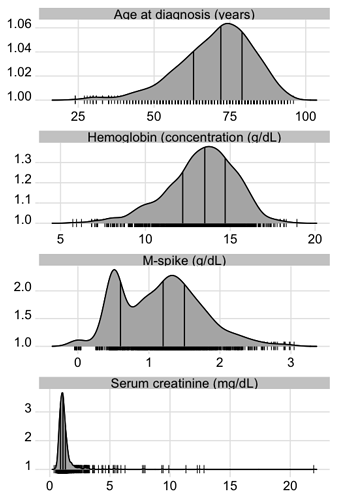 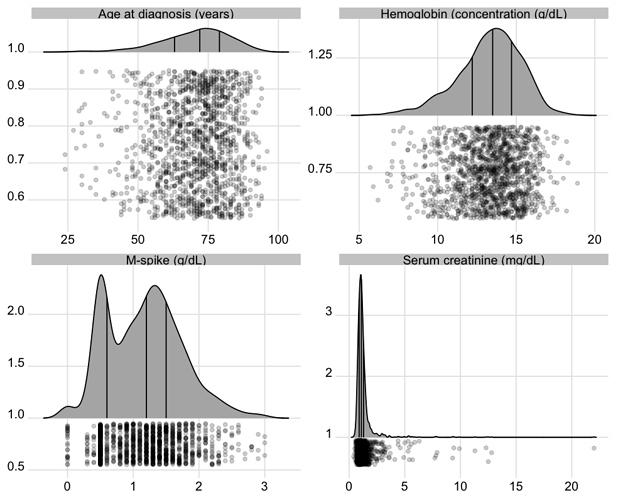 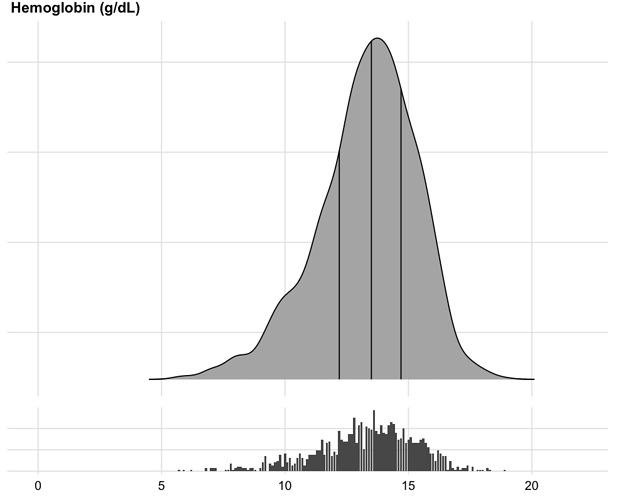 That’s really excellent. But we can show more: the relationship between each baseline variable and outcome. See this .

I don’t think jittering is the way to go as points get hidden in the dense region. I’d go with spike histograms as with the Hmisc histSpikeg function that works with ggplot2.

Thanks for the comments Frank. I’m having troubles using your histSpikeg function. Ideally I would like to keep the dplyr pipe – almost – intact. See above some edits to my previous post.
Agree that showing association with outcomes very interesting!
I’m just keeping it simpler for the time being…

i guess people saw this paper recently re meta-analysis plots: Charting the landscape of graphical displays for meta-analysis and systematic reviews
although they don’t provide the code for the best plots, only figures 3-7, R code

I am not sure if it’s appropriate to ask this basic question here…
With the spike histogram on the curve in the example above (first graph), using histspikeg, what does the spike on the curve actually represent? I gather it should be representing the distribution of creatinine on the curve within some x range, but I can’t figure out what that means (e.g. what does the width of the vertical spike mean? what does the space between the spike mean… etc?).
Apologise if this is a very basic question, I am just not familiar with spike histograms and can’t seem to find an answer when googling it.
Thank you.

Spikes are used so that you don’t need to talk about the width. The width conveys no information. The height is proportional to the bin frequency just as with histograms in general. Just think about this as a regular histogram with very thin bars and lots of bins, to show the marginal distribution of the predictor.

Oh yes! I can see it on the graph now and how it is related to the rug plot at the top! Thank you!