Odds ratios seem to be collapsible?

The causal risk ratio for X can be computed by standardization across strata Z as follows:

The causal odds ratio for X was considered non-collapsible because it could not be standardized across strata Z as follows which was the classical definition of non-collapsibility:

It seems that the causal odds ratio for X should be computed by standardization of probabilities alone across strata Z as follows since odds should emerge from risk standardization:

Thus for the data below

So does this not mean that odds ratios are collapsible given that the stratum specific ORs are 2.67 while the “risk-standardized” OR is 2.25 consistent with the marginal OR? The scientific question of interest here is whether the question raised about the collapsibility of odds (and thus ORs) is because instead of converting standardized risks to odds we directly attempted to standardize odds. Perhaps this demonstrates that we should always think in terms of risk regardless of the use of odds ratios - they are just a tool to enable us understand risks better.

Please edit your post to explain the ultimate goal of the estimand. You seem to be making a number of big-picture assumptions that may not be true. Also check that it is valid to uncondition odds by multiplying by the probability of the conditioning event. I don’t think it is. Such multiplication is used to uncondition probabilities.

You may be right. To be honest I am not too sure myself hence this post but better I take this offline directly with Miguel Hernan as I am referring to standardization as he defines it in his book

This is the place for controversy so I would appreciate it if you would edit your post.

Okay, let me give your queries some thought … will edit it and flag the edits at the end of the post. Have to think about your comment on unconditioning odds using probabilities

Edit 1: I gave this some thought and after thinking about this I conclude that standardization is a form of weighted averaging using population weights (as opposed to variance weights which then would make this a meta-analysis and not standardization) so standardizing ORs using probabilities
a) Does not uncondition the odds (agree with you)
b) Does define the collapsibility issue. Miguel says in his book “We say that an effect measure is collapsible when the population effect measure can be expressed as a weighted average of the stratum-specific measures. In follow-up studies the risk ratio and the risk difference are collapsible effect measures, but the odds ratio–or the rarely used odds difference–is not (Greenland 1987).” so this weighted average I have defined above (using probabilities) seems the correct definition of non-collapsibility in this example since its value is on one side of the stratum specific estimates in the absence of confounding.

It is not appropriate to speak of population weights unless you have access to population weights, i.e., the sample was a random probability sample from the population and you know the sampling probabilities. Many authors have confused population weights with sample weights from non-random samples, i.e., convenience samples with unknown weights. And if you narrow the focus to what is available, i.e., you uncondition with respect to the covariate distributions in the sample, you have not accomplished very much.

I thought so too - hence the equations in the first post but then if we do so the weighted average risks, when built back, take us to the marginal OR

In terms of weights my understanding is that choice of weights depends on purpose so I just used that term more generally (as an example) to refer to non-variance weights in general. In this case we have weights whose purpose is to equalize the frequency of the “values” in a data set aka standardization. I agree very few papers actually do this for odds as I did above but there is an example. But when one says the stratum specific ORs are the same but the marginal is different then the implication is that there are no sets of weights that can “collapse” the two strata values on to the marginal value.

Take a glance at https://www.fharrell.com/post/marg/

Thanks, this really helped clear my thoughts. Lets consider that the example above is the same study you presented with X being the treatment indicator, Z being sex and Y the binary outcome of interest. We know that delta_p and delta_logit are approximately linear (see next post) and therefore the conditional OR of 2.67 is computed based on the logit increase induced by a particular risk increase induced by X. The marginal OR is 2.25 so this must mean that the two groups defined by X are closer together in terms of risk based on the distribution of the prognostic sex variable in the sample. Several questions I have tried to raise now become clearer:

a) All the discussion thus far points to the OR being collapsible and indeed a weighted average of risks can be built back to the marginal OR as indicated above. We can only consider it non-collapsible if odds are standardized but the implication of doing so is equal to the second equation above which as you suggested is problematic - so which way do we go?

b) You have said that the interpretation of the marginal OR is that the sample-averaged OR (in this example 2.25) does not apply to males, does not apply to females, and can conceivably only apply to a patient whose sex the physician refuses to know and for which their probability of being female is exactly 0.5. Can we also say that the marginal OR applies to either sex albeit with systematic error induced by lack of sex information? Thus a marginal OR then becomes a less accurate OR but for that reason must “differ” from the conditional OR because of interference by a prognostic third variable so why should we be surprised?.

I have been thinking about this some more and realize that a few edits need to be made to my previous post which I will do soon. Just to take this further, I expanded the data in the first post 2500 fold so that there were a million data points. I then created a repeated (1000 times) random sample of 400 from this total population and ran three binomial family GLMs (logit, log and identity links) with inclusion of a product term. The relationship between the logit and identity model product terms is depicted below 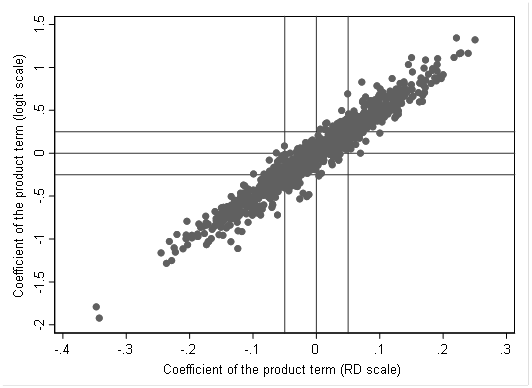 On average a 0.01 increment in the coefficient for the product term on the RD scale is associated with a 0.05 increment in the coefficient of the product term on the logit scale thus it is clear that both can be interpreted in terms of additive effect modification and a multiplicative product term (OR scale) is only important in its interpretation in terms of the natural scale. Given that the relationship is not exact there will be inconsistencies especially when the product term is close to zero in which case the margins plot should be able to resolve this since it takes us back to the natural scale. Of interest, this means that if is possible for the effect of X on Y to have the same stratum specific odds ratios yet the stratum variable, Z, can still be an effect modifier (on the natural scale) - but this should be an uncommon occurrence.

So the simulation results suggest that several pairs of baseline risk (r0) and OR combinations can result in the same RD albeit in a narrow range. Once I work it out will edit this post. Anyone who would like to pitch in - please do 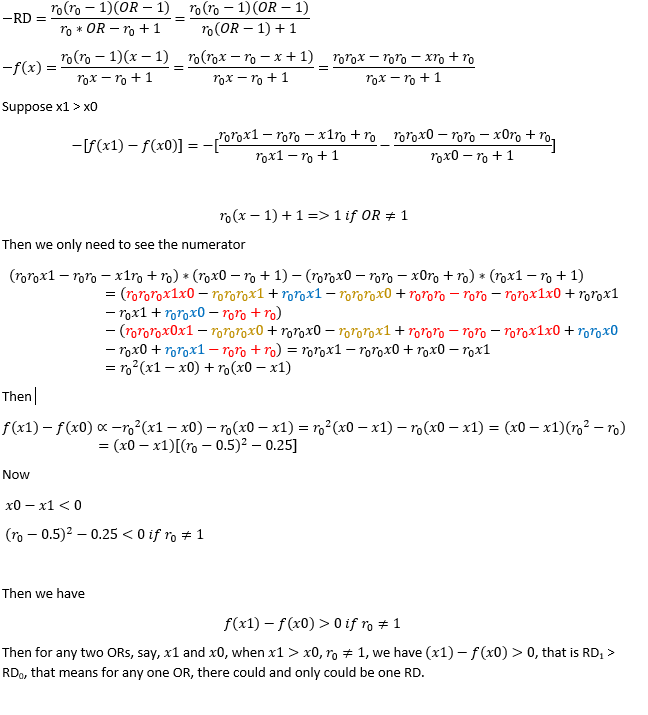 Hi, see my prove that provide biasline risk is constant, and not equals to 1, from the equation, one OR could only result in one RD.

Thanks, I can see that your first step is to indicate that the RD was defined as r0-r1 and you want it to be defined as r1-r0 . I don’t think that matters as the OR would define its interpretation.

If this is a one-to-one function then it means the simulation graph in the previous post is giving us variability due to GLM estimation error? Never imagined it could be that much?

Maybe due to the approximating procedure (e.g. laplace) of the ML function and the further convergency problem during the iteration?

I don’t think so because the simulation result is not sensitive to choice of sample size. Probably something to do with the fit of different links.

Hi, see my prove that provide biasline risk is constant, and not equals to 1, from the equation, one OR could only result in one RD.

It is now clear that the simulation variability is indeed because a range of RDs (albeit a small range) map on to the same OR and this (from your proof above) is motivated by variations in baseline risk (r0).

Edit: A summary of the conclusions from this discussion are posted here as a preprint - please feel free to be as critical as possible if you think the conclusions are not right. Happy if anyone is interested in joining in on it and has any different ideas. Of note, the conclusions have changed quite a bit over the course of the discussion

After giving this more thought, it seems that the most logical conclusion from all this thinking and paying more attention to Frank’s post on statistical thinking is this:
Effect modification should only be considered present when the observed joint effect is inconsistent with the expectation under Bayes’ rule
Since odds ratios are likelihood ratios connecting pre-exposure to post-exposure odds, deviation from the rule means violation of the expected relationship between joint and conditional probabilities = effect (measure) modification.
If so, there is really only one type of effect modification - on the OR scale. The preprint linked in the previous post has been updated for anyone interested to have a look.

An example may bring this into perspective:
Morabia et al published a paper titled Interaction fallacy in 1997. The fallacy was quite simple - the product term on the OR scale suggested that older age at first pregnancy modified the effect of the BRCA1 mutation on breast cancer risk. On the RR scale the product term suggested no effect modification.
If we look at the data reported, without the mutation baseline risk was 6% and with the mutation was 61.5%. Older age at first pregnancy increased risk 1.5 fold at both baseline risks. However the odds increased 1.6 fold at the lower baseline odds and 15.6 fold at the higher baseline odds. They dismissed the latter as fallacious. It is now very clear that the former was fallacious as the RR spuriously declined at the higher baseline risk given that it moves towards the null as baseline risk increases!