Article: Going from evidence to recommendations: Can GRADE get us there?

I thought the following was worth reading:

Blockquote
In this paper, we reveal several issues with the underlying logic of GRADE that warrant further discussion. First, the definitions of the “grades of evidence” provided by GRADE, while explicit, are functionally vague. Second, the “criteria for assigning grade of evidence” is seemingly arbitrary and arguably logically incoherent. Finally, the GRADE method is unclear on how to integrate evidence grades with other important factors, such as patient preferences, and trade-offs between costs, benefits, and harms when proposing a clinical practice recommendation…It is our view that the issues presented in this paper undermine GRADE’s justificatory scheme, thereby limiting the usefulness of GRADE as a tool for developing clinical recommendations.

Contrast the GRADE approach with this decision analysis using value of information.

Blockquote
This paper presents a decision-analytic approach to trial design which takes explicit account of the costs of sampling, the benefits of sample information and the decision rules of cost-effectiveness analysis. It also provides a consistent framework for setting priorities in research funding and establishes a set of screens (or hurdles) to evaluate the potential cost-effectiveness of research proposals. The framework permits research priority setting based explicitly on the budget constraint faced by clinical practitioners and on the information available prior to prospective research. It demonstrates the link between the value of clinical research and the budgetary restrictions on service provision, and it provides practical tools to establish the optimal allocation of resources between areas of clinical research or between service provision and research.

A commonly cited paper for evidence interpretation of predictor biomarker studies is Simon et al. Use of Archived Specimens in Evaluation of Prognostic and Predictive Biomarkers. JNCI 2009: 101: 1446-52. The authors have a very good discussion of the differences between retrospective and prospective studies (see section heading - “Prospective vs Retrospective Studies: A Matter of Semantics”). However, I have found that some people - including some influential review bodies - assign most retros…

The GRADE approach (Grading of Recommendations Assessment, Development and Evaluation) is very widely used tool to evaluate the certainty of evidence in healthcare. The GRADE approach is usually associated to meta-analyses pooling single point estimates. The grade and statement goes as follows: |High| = We are very confident that the true effect lies close to that of the estimate of the effect |Moderate| = We are moderately confident in the effect estimate: The true effect is likely to be cl…

I don’t think anyone has mentioned GRADE yet in this topic (may be wrong - I haven’t read through the whole thing). I’m ambivalent about it. Personally I don’t find language statments particularly useful - I’d rather look at the numbers - but other people don’t share that view. I’m interested in what people think about their recommended statements, which have been largely adopted by Cochrane, so are being seen by a lot of people. Described in this paper: I find some of them a bit problemati…

An empirical study of “evidence hierarchies” 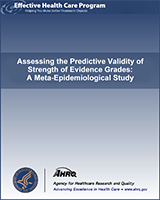 Assessing the Predictive Validity of Strength of Evidence Grades: A...

We sought to determine the predictive validity of the U.S. Evidence-based Practice Center (EPC) approach to GRADE (Grading of Recommendations Assessment, Development and Evaluation) by examining how reliably it can predict the likelihood that...

Blockquote
The limited predictive validity of the EPC approach to GRADE seems to reflect a mismatch between expected and observed changes in treatment effects as bodies of evidence advance from insufficient to high SOE. In addition, many low or insufficient grades appear to be too strict.