Most statisticians I’ve spoken with who frequently collaborate with investigators in doing frequentist power calculations believe that the process is nothing more than a game or is voodoo. Minimal clinically important effect sizes are typically re-thought until budget constraints are met, and investigators frequently resort to achieving a power of only 0.8, i.e., are happy to let type I error be 4\times the type I error probability. As a study progresses, the problem re-emerges when doing conditional power calculations that use a mixture of data observed so far and the original effect size to detect.

Statisticians brought up in the frequentist school are often critical of Bayesians’ needing to choose a prior distribution, but they seldom reflect upon exactly what a power calculation is assuming. The use of a single effect size, as opposed to using for example the 0.9 quantile of sample size over some range of effect sizes, has a large effect on the design and interpretation of clinical trials. Bayesian analyses do not use unobservables in their calculations. Sure there is a prior distribution, but this represents a range of plausible values, and doesn’t place emphasis on a single value if the prior is continuous (which I recommend it should be).

Bayesian power is a simpler concept than frequentist power. Given a prior distribution and a design and a schedule for data looks (in a sequential study), Bayesian power can be defined in at least 4 ways, with the first one below being the simplest. (Thanks to Andy Grieve for providing the last two in his reply below).

Spiegelhalter, Freedman, and Parmar provide a very elegant example of Bayesian thinking and how it avoids unobservables in a setting in which conditional frequentist power might have been entertained to decide whether a study should be stopped early for futility. Spiegelhalter et al have a very insightful equation that for a simple statistical setup and a flat prior estimates the chance of ultimate success given only the Z-statistic at an interim look that was based on a fraction f of subjects randomized to date. This is shown in the figure below, following by the R code producing the figure. Spiegelhalter et al take issue with the practice of stochastic curtailment or conditional power analysis that assumes a single value of the true unknown efficacy parameter. This Bayesian predictive approach requires no such choice. 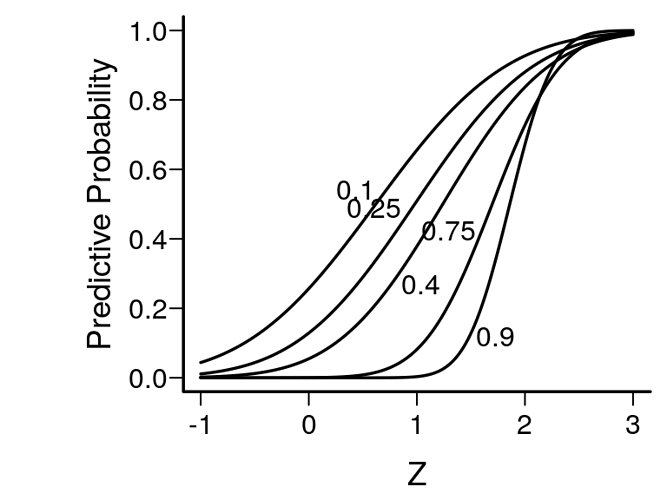 zfutil-1.png768×576 21.8 KB
Predictive probability of the final 0.95 credible interval excluding zero, and the treatment effect being in the right direction, given the fraction f of study completed and the current test statistic Z when the prior is flat. f values are written beside curves.
5 Likes
Bayesian analysis of RCT data
Stability of results from small RCTs
Who should define reasonable priors and how?
Language for communicating frequentist results about treatment effects
davidcnorrismd July 7, 2019, 9:08pm #2

Bayesian analyses do not use unobservables in their calculations.

Thank you for this interesting post, Frank! You utterly dismantle frequentist power here. But would you explain a bit more what you mean by “unobservables” in this context? Which ‘unobservables’ pollute the frequentist power analysis, and why does an abstraction like the (Bayesian) probability of a 1-off event (such as posterior crossing 0.95) not count as ‘unobservable’ also?

Hi David - I won’t get into the philosophy of probability for the moment. It may not be observable but it’s a useful metric all the way around. For the main point, I may need to find a better word for ‘unobservable’, something akin to ‘unknowable’. What I’m trying to get at is that frequentist statistical testing and sample size calculations need to set two parameters, among others: to get type I error or a p-value you have to assume the treatment effect is exactly zero, and to get type II error you must actually ignore the data while assuming a single number for the true unknown effect. Wording suggestions welcomed.

to get type I error or a p-value you have to assume the treatment effect is exactly zero, and to get type II error you must actually ignore the data while assuming a single number for the true unknown effect.

This seems like an even more devastating critique than “unobservable”. A word like “incoherent” [1] comes to mind, but then there’s the danger of merging what might be a special criticism (vis à vis power calculations) into the broad sweep of the entire Bayesian critique of frequentism. I’m at a loss for a better word, also.

I don’t have a problem with the term “unobservables” since it fits nicely into Seymour Geisser’s thesis that what we generally want to do is to predict observables: whether it is going to rain tomorrow, whether a particular patient will respond to treatment. Each of these is observable, whereas a theoretical parameter - the average response in a population is not.

There are 2 ways to determine Bayesian power. One is to use the predictive distribution of the data and the other is to use the average of the power conditional on a given parameter value with respect to the prior distribution of the parameter. Sometimes the latter is analytically simpler and as Geisser wrote “My view … has also been to use a parametric formulation, when necessary, as a convenient modeling device in order to
get on with the job of predicting observables.” I agree.

Comments. There are 2 other ways to compute Bayesian power. I’m going to edit my post to include all 4.