This is a great topic because I’ve been trying to understand competing risk analysis for 20 years. My current thinking is that it’s impossible for most people to understand, so I use discrete time state transition models for which all assumptions and all probabilities are out in the open, and they also handle recurrent events very well.

yes, i’ve struggled with this. Reading the literature i see ambivalence. Eg re cause specific hazard:

I can’t help thinking this is all a reprise of the same problem Aalen & colleagues have explored [1,2], in which statistics’ customary high level of abstraction renders it incapable of achieving mechanistic causal explanation & understanding. Here’s a passage from the Conclusion of [2]: 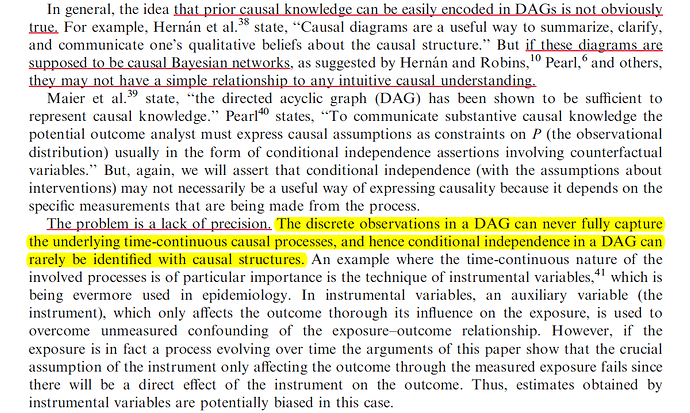 I would propose that, as with the DAG, the abstractions you all are employing lack mechanistic precision. (It’s perhaps no accident that the element of time is so profoundly present in the present discussion as well.)

Great discussion. Here is an example to show why I think competing risk analysis is confusing. Suppose we have only two events: myocardial infarction (MI, fatal or nonfatal) and death not due to MI. First of all don’t we need to assume that MI is independent of death? What exactly does that mean? I assume it means that an impending risk of death does not alter your risk of MI. If so that is an unverifiable assumption. We can check whether a nonfatal MI alters your risk of all-cause death using a time-dependent covariate. But since death can be observed regarding of MI status one can compute a meaningful cumulative incidence of death with no assumption about MI.

The cumulative incidence of MI at 5y with non-MI death as a competing event is the probability of having an MI within 5y that preceeds death. What exactly does that mean? Can people interpret it?

Contrast that with a state transition model that gives rise to state occupancy probabilities. Note that we have to specify whether MI is an absorbing state or not. It has to be non-absorbing because a person can change for the state of “alive with MI” to dead. So in computing probabilities of MI you need to decide whether to compute the probability that a patient has ever had an MI or whether the patient currently is in status “MI”. State occupancy probabilities invite you to consider also the more simple quantity of the exacted number of MIs a patient has had within 5y, which is something you also get from the cumulative mean function in recurrent events analysis.

To have non-overlapping states, MI below means MI and alive. So we can compute

Interpretable in terms of what? The basic intuitions remain unexamined.

EDIT: Okay, I see it now. These probabilities are interpreted precisely in terms of the possible paths individuals may take through the states, with the careful observation that fewer of these states will be absorbing than one might casually realize. The state transition diagram establishes a set of canonical paths to represent the most relevant life-histories for discussion. These, in turn, might be compared according to the individual’s personal values. This is possible because these histories are more concrete than abstractions such as hazard ratios.

A good place to start is this vignette by the great Terry Therneau using the R {survival} package:

Many seems to have issue with the Fine and Gray approach and how to interpret regression coefficients.

That is a very nice explanation. Thank you Prof. Harrell. So you prefer a Markov multistate model instead of competing risk analysis. But what do you think of RMST and RMTL analysis where RMTL is basically the time lost secondary to competing risk and censoring??

I like “time in state”-like quantities; I just want to get them from state transition models and not from harder-to-interpret-and-less-flexible competing risk models.