I am trying to figure out how best to compare gestational age as an outcome in clinical trials.
In general, gestational age is almost always left-skewed data presumably due to the fact that pregnancies won’t last far beyond 40 weeks (in part due to labour induction), but viable preterm birth is not an uncommon occurrence and can extend as low as 23 weeks. Please find here a histogram for a real gestational age dataset from a maternity hospital (n = 153): 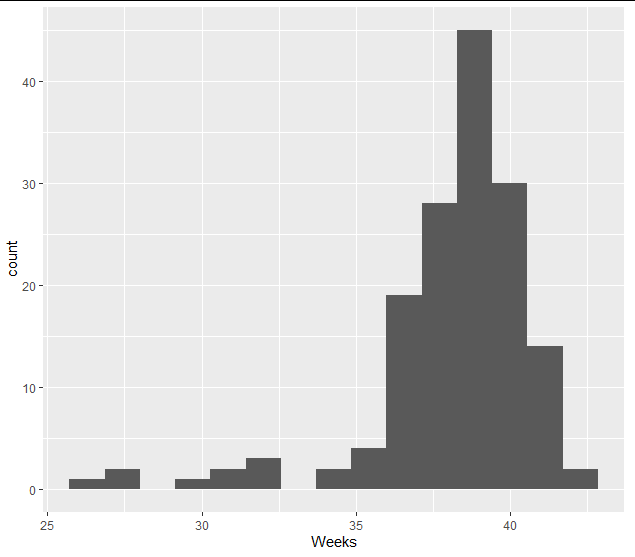 For randomised controlled trials that aim to reduce preterm birth, I am trying to work out an optimal way to analyse this data. A brief review of previous trials show that this is generally done in three ways:

Option 1 is probably not optimal due to the various issues associated with dichotomisation, which are extensively covered on this form and in Frank Harrell’s BBR.
However, I’m trying to choose between Options 2 and 3. Both would yield interpretable estimates. Option 2 would likely require transformation to normal (e.g. power transformation, see histogram below), but I fear that the relatively hard upper bound may still be problematic. Option 3 might offer some more flexibility, but the relatively hard upper bound may not play nice with the proportional hazards assumption. 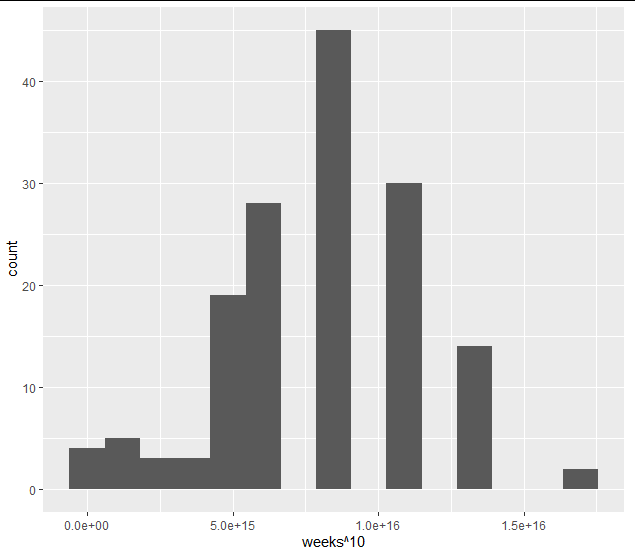 I would be very grateful for any advice on analysing this data in a clinical trial context. There are other models that I’m less familiar that may perhaps suit (e.g. Gompertz?), but I’m a bit concerned that these may be less interpretable for clinicians.

For option 2. think more generally than means. The Wilcoxon test and its time-to-event counterpart the log-rank test are good candidates as these will handle any distribution. The Wilcoxon test can be done using the proportional odds model as detailed in BBR whereby you can adjust for covariates. If you need to handle censoring such as non-live births then you have special problems.

Many thanks for the suggestion Frank. A proportional odds model may be good for including the covariate gestational age at randomisation.

I would think it most important to characterize effects on the left-hand tail when studying interventions to extend pregnancy to term. Roughly, the distribution of gestational age at birth might be considered a mixture of ‘normal’ and ‘preterm’ densities, with the intervention aiming to shift pregnancies from the preterm to normal group, or perhaps to shift the preterm group rightward to ‘buy time’. Relative to the underlying construct of fetal maturity which ultimately matters to birth outcomes, there is a measurement error inherent to gestational age that may also be worth considering in analysis.

Many thanks for the advice. Yes, I agree with the mixture of densities. I’m currently trying to look into methods that could put more weight on this left-hand tail. Regarding the inherent measurement error to gestation age, there are various clinical methods to estimate this, some may reduce the measurement error a bit, but it will be difficult to minimise this I’d imagine. The PI of this study may know more on this however.

Can an OB comment? You’re right about the tail. But clinicians will also be interested in two subgroups of the preterms. Those who just went into labour and delivered. And those who got iatrogenic preterm delivery for whatever reason. We’re having a devil of a job sorting this out in a couple of trials of a drug for a rare pregnancy condition, which causes preterm labour, but for which OBs sometimes deliver early as treatment! The drug did not reduce preterm birth overall but did reduce spontraneous PTB. It’s not a statistical issue, except insofar as it’s good to get in the analysis plan early.

Another issue you might want to think about. OBs often induce everyone a week or so overdue, and high risk women sometimes at term, or even a week early. “Just to be safe!”. If you’re interested in preterm birth this can play havoc with options 2 or 3. Shouldn’t be a problem with double bind trials.

I’m guessing you’re writing the anaylsis plan for a RCT. If so, do you know Paul Seed from St Thomas’s London. He’s wrestled a lot with these issues. Good luck Jim

@jimgthornton many thanks for your helpful advice, and apologies for the delayed reply. Definitely food for thought. I’m indeed helping a PI with a SAP for an RCT, which aims to extend gestational age.
I’ve discussed this also with a statistician who specialises in fertility and he suggested restricted mean survival time may also be an option. Perhaps by setting the specified end of follow-up time at 37 weeks may resolve some of the issues caused by induction.

In the end, I imagine any treatment would be interesting if it extended gestational age in the preterm period of viable birth.
Considering this, another approach I’ve come across is described in https://academic.oup.com/aje/article/175/2/91/82380. Here the authors specified an “at-risk window” at 27th to 37th week and worked out the odds of a birth happening before a specific week using a logistic model with multiple covariates of interest.
Here any births beyond 37 weeks were censored. This might be somewhat similar to @f2harrell’s suggestion in an earlier post?
Would be grateful for any thoughts.