What about this weird 2 arm design (Lancet article)

Published in the Lancet

Participants in arm A turn out to use more cannabis (and more of everything else: more tobacco, more stimulants, more alcohol, etc.) and are more psychotic, hence, “assuming causality”, the cannabis caused he psychosis.

Problem is that the arms are defined based on the outcome. This strikes me as weird.
I have many more axes to grind with this study, but let’s go step by step! 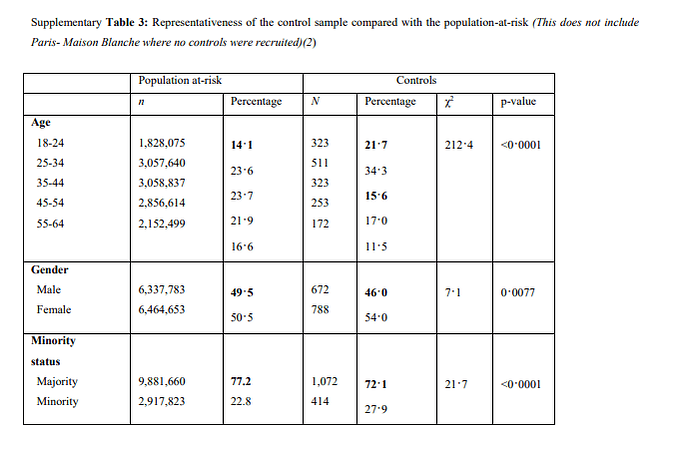 They did look at representativeness looking at age, gender, enthicity (sort of) and (not in this table) education, all fine, but that’s imho not the issue.Point is your comparing people with psychosis to the general population and attrribute the difference to 1 of the factors that you happen to measure. But probably the cases and the controls have a different genetic make up. Also I wouldn’t be surprised if the cases have lower incomes, more stress, etc etc.

(For the record, I am an advocate of cannabis legalization because that is imho a better way to protect public health than prohibition, especially for vulnerable people. This may of couse mean I have a different confirmation bias, therefore I welcome critical voices

Also, I asked for a link to a public data repository, turns out there isn’t and the authors “maybe plan to make the data available in 2020”.

How is it possible that a serious journal such as the Lancet allows publications based on invisible data? Isn’t it the essence of science that all steps should be transparent and up for scrutinity?

What good are precise references to literature, detailed tables & graphs, a detailed methods paragraph etc., if the main ingredient, the data, are not available?

If this doesn’t fit here,moderator please let me know or move or delete this post, no problem. Thanks!

that link is throwing up a warning: “Warning: Potential Security Risk Ahead”
try this instead?: https://www.sciencedirect.com/science/article/pii/S2215036619300483?via%3Dihub

edit: “we used the cluster option in Stata” = we don’t know what we did

edit: “we used the cluster option in Stata” = we don’t know what we did

Spot-on observation here. With 11 sites, the authors would have been working with a bare-minimum number of clusters. (On no less an authority than The Hitchhiker’s Guide to the Galaxy, Angrist & Pischke [1] advise using cluster-robust variance estimators on no fewer than 42 clusters.)

In this extreme case only 2 clusters were used, resulting in a not-quite-retraction.

“On the basis of χ² and t-tests, data on the use of other recreational drugs were included as confounders in the main analysis, with low or no use scored as 0 and use scored as 1 in categorical variables: tobacco (never used or smoked <10 cigarettes per day vs smoked ≥ 10 cigarettes or more per day …and mean number of alcoholic drinks consumed daily on an average week.”

SHOW ME HE DATA, SHOW THE MODEL, SHOW ME THE RESULTS!

And these are just two paragraphs…

Hope I don’t step on any toes but eh…

(On no less an authority than The Hitchhiker’s Guide to the Galaxy , Angrist & Pischke [1] advise using cluster-robust variance estimators on no fewer than 42 clusters.)

Anyway, the authors calculate that if the cannabis market would only consist of ‘weak’ weed (with a THC-content of 10% or less, somehow in this case not 42 but 10% seems to be the magic number

It’s pretty common that, when researchers can’t make their minds up as to whether a risk factor has confounding or mediating effects, they decide to “adjust for it” on the side of being conservative (or, at times I’ve heard, to be “thorough”). Of course, it doesn’t preclude the possibility of collider bias.

Also, one must wonder if all the education about Berkson’s bias has taught us nothing. Cases samples from clinic with psychosis diagnoses, controls from the general population. Yes, had the controls been sampled from the clinic, they may be more likely to have the exposure as a reason for their being a patient (I dunno, say glaucoma). What about the lead time of psychosis? Also, and I’ll wager, they used self report to exclude controls with prior psychosis diagnosis. But… can you trust self-report of psychosis diagnosis?

The only conclusion to this paper should be that patients who go to see doctors are sicker on average than patients in the general population.

On the positive, this makes a great example poor analysis and over-reaching conclusions. Perfect timing, since my next series of EBM lectures will be to the Psychiatry residents. So many great teaching points.

Thank you Raj, and good luck with your lectures.