This is the fourth of several connected topics organized around chapters in Regression Modeling Strategies. The purposes of these topics are to introduce key concepts in the chapter and to provide a place for questions, answers, and discussion around the chapter’s topics.

We have baseline variables, age, sex etc. but we also have 88 other variables relating to patient joints for example swollen elbow, tender elbow etc. The data will not support all these variables and so variable reduction would be useful. What method would you advocate for the 88 joint variables? The 88 are all binary (yes/no). Thank you. Eamonn

Look at correspondence analysis for starters.

Selecting a subset of predictors after stepdown/from ANOVA for a clinical prediction model
Hanis_Kadir October 20, 2021, 9:39am #3

I had not attended your course (really wish I could attend one in the future), and I hope it is okay for me to post a question here.

I refer to the section 4.12 of RMS book, the different models:

Additionally, how are the different models defined in the book? I read Shmueli, G. (2010). To explain or to predict? Statistical Science, 25, 289–310, but I wonder if there’s any distinction in the definition of these. In summary:

I hope to learn more from you. Thanks!

Welcome to the site Hanis. Anyone interested in regression modeling strategies is welcome to post on any of the RMS-related topics on datamethods.

Your questions are excellent. First, univariable screening is a bad idea in almost every context. It may do even more damage for explanatory modeling but it fails for all goals. One of the many problems wrong with it is the use of arbitrary thresholds on a nearly irrelevant scale. Using a higher p-value threshold doesn’t make univariable screening a good idea. If you really wanted to achieve some parsimony, @Ewout_Steyerberg has shown that using backwards stepdown variable selection with \alpha=0.5 (yes that’s 0.5 not 0.05) doesn’t do much harm. Such backwards stepdown is done on a full pre-specified model.

Models should be pre-specified to the extent possible, and statistical significance avoided when considering the inclusion of a variable. One example of why this is the case is that a bunch of “insignificant” predictors can explain confounding.

Shmueli has things laid out nicely.

Regarding degrees of freedom, particularly in the context of random and mixed effects models, see the Introduction of Julian Faraway’s notes on the revision of his book Extending the Linear Model.

The inventor of PCA, Karl Pearson, was well educated in mathematical physics and borrowed the ideas of principal components analysis from rigid body dynamics. Basically a PCA is a rotation of the n-dimensional coordinate system formed by the n explanatory variables. The rotation is done so that the new coordinates correspond to the principal axes of an n-dimensional ellipsoid defined by the variance-covariance matrix. The first principal component corresponds to the long axis of this ellipsoid, the second PC to the second longest axis of the ellipsoid, etc. Put another way, the first PC is a coordinate along the line of maximum variance of the n-dimensional data, the next PC is orthogonal to it and along the line of second largest variance, and so on.

Then PC regression is just a linear regression modeling using the new variables (the PCs) instead of the original variables.

I elaborate on the historical connections with classical physics in this article (PDF) Letter to the Editor: Euler's contribution to mathematics useful in statistics, by H.A. David | Christopher Tong - Academia.edu

In terms of decoding the PC s for a non-statistical audience these are the tricks I would use:

Usually better than these is to use sparse PC s so that each PC_i will have many fewer nonzero variable loadings. This effectively combines variable clustering with PCA.

What is the difference between stepwise regression and fast backward step down variable selection?

“Stepwise” includes forward selection, backward stepdown, and all-possible models. Fast backward stepdown refers to making an approximation to full backwards stepdown, such that the sub-models are not really fit but regression coefficients after removing variables are approximated using a multivariate normality assumption.

Stepwise selection you have mentioned is not a good method.
Since Fast backward stepdown is “stepwise”, does that make it a poor method as well?
When is fastbw() appropriate to use? Can that be a way to reduce overfitting?
For fastbw(), does that use AIC to select the best model?

Correct, fast backward stepdown is just as problematic as the others. Use of any of these methods does not reduce overfitting. Neither does using AIC which just amounts to using a different p-value cutoff. The only time I use backwards stepdown (fast or not) is when I am forced to have a smaller model and the number of variables deleted is small.

Both linear and nonlinear effects of X1 were sig (anova() output).

Y and X1 have an inverted U-shaped relationship (ggplot() output).

Chapter 2 of the RMS course notes has the background information needed. Interpretation (and especially “significance” testing) of individual coefficients is not relevant for spline functions. Use the multiple degree of freedom “chunk” tests from anova, which bring evidence for association (non-flatness of spline functions).

When you don’t have subject matter knowledge to allow pre-specification of knot locations, the rcs function places knots where the local sample size supports estimation of parameters. This is done by computing quantiles of the predictor. You’ll see in Chapter 2 the table of default quantiles used. specs shows you the knot locations used. The chapter also contains graphs showing exactly what is going on. A knot is where the jolt (also called jerk in physics; this is the 3rd derivative of the function) is allowed to suddenly change. Loosely speaking this is where shape changes are allowed.

We don’t make knots free parameters then try to find the best fitting knots because (1) that would make inference/confidence limits very complex and (2) with restricted cubic splines the location isn’t that important anyway. The number of knots is more important.

Ok. So the coeffs I get from ‘print(fit)’ are irrelevant. Perhaps the only relevant info I get from this output is the sig of the LR test and the adj R2, correct?

“Multiple degree of freedom chunk tests from anova”: Is this the output from ‘anova(fit, X)’?

When I put 3 knots at the .10, .5, and .90 quantiles, there is evidence of a non-linear relationship. But when I change the position of the middle knot to other quantiles, the result does not change. What does that mean? What is the point of showing a non-linear (inverted U-shaped) association between X and Y if I can´t show where the curve changes its slope?

From a practical standpoint, this is the most relevant info to be extracted from my model (in my view). I want to show not only that X and Y are associated, but also that their association reverses depending on the value of X. Of note, X is a measure of disease severity (ranging from 5 to 66 in my sample; scale ranges from 0 to 66) and Y is a continuous measure of brain activity.

From print individual coefficients and SEs are valuable if a predictor is linear or binary. Overall measures such as the ones you named are always valuable.

Yes anova(fit) gives you most of the chunk tests you need. It also makes it easy to get other ones

As I said previously changing knots doesn’t change things very much if the number of knots stays the same. The “what is the point” question does not make sense. It always helps to graph the whole curve. The fitted curve and its confidence band shows you what you’re seeking.

Linear splines are not very realistic, with their discontinuous first derivatives.

You’re making all this harder than it really is.

Thank you, I appreciate your feedback.

In ‘summary(f)’, is there a way to compute (and then plot) the point estimates and CIs for different effects of the same predictor at once? For example, to compute the point estimates and CIs for the effects of changing X from one quantile to another (.05 up to .95) in a pairwise fashion? The ideia is to have all these effects on the same ‘summary(f)’ output and then display them all on a single ‘plot(summary(f))’. I tried the code below but it did not work:

I know I could do it one by one, but maybe there’s a better way?

This is done with contrast. Type ?contrast.rms for help which includes a ggplot2 example.

Thank you.
I had a look at ?contrast.rms but could not figure it out.
Not sure whether I expressed myself well in my last message.
I’m using this code and this is what I’m getting from plot(summary(f)): 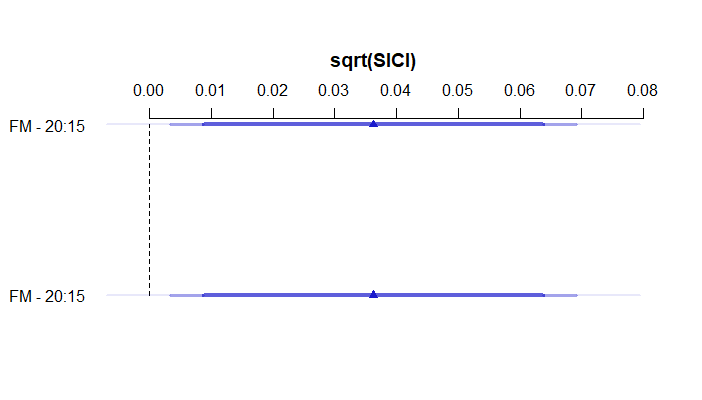 No, please read my message more carefully. Get the output of contrast and take control of how it’s plotted using your own plot commands such as ggplot2 functions. summary is for comparing only 2 values.